The Sweet History of Italian Candy 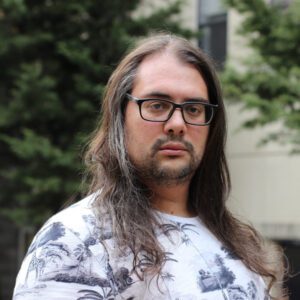 From the bitter flavor of liquorice to the sweet creaminess of hazelnut spread to minty breath fresheners, sugary Italian candy has a long, rich history. Early confections were made from honey, a natural sweetener that requires no processing. Ancient Romans in particular had an affection for it and kept apiaries and imported large quantities from across the empire. Their teeth suffered from it too, with archaeologists finding cavities in Roman remains.

Cane sugar arrived in the Renaissance. The addictive new sweet spread from Sicily, where it was introduced by Arab merchants, and then across the peninsula, but only wealthy aristocrats could afford to eat it.  The sugar was added to Marzipan made from almonds and eggs creating sweet candies in a variety of shapes, and in Florence, sugar was a favorite topping for pasta, combined with butter or cinnamon. Candy came later. 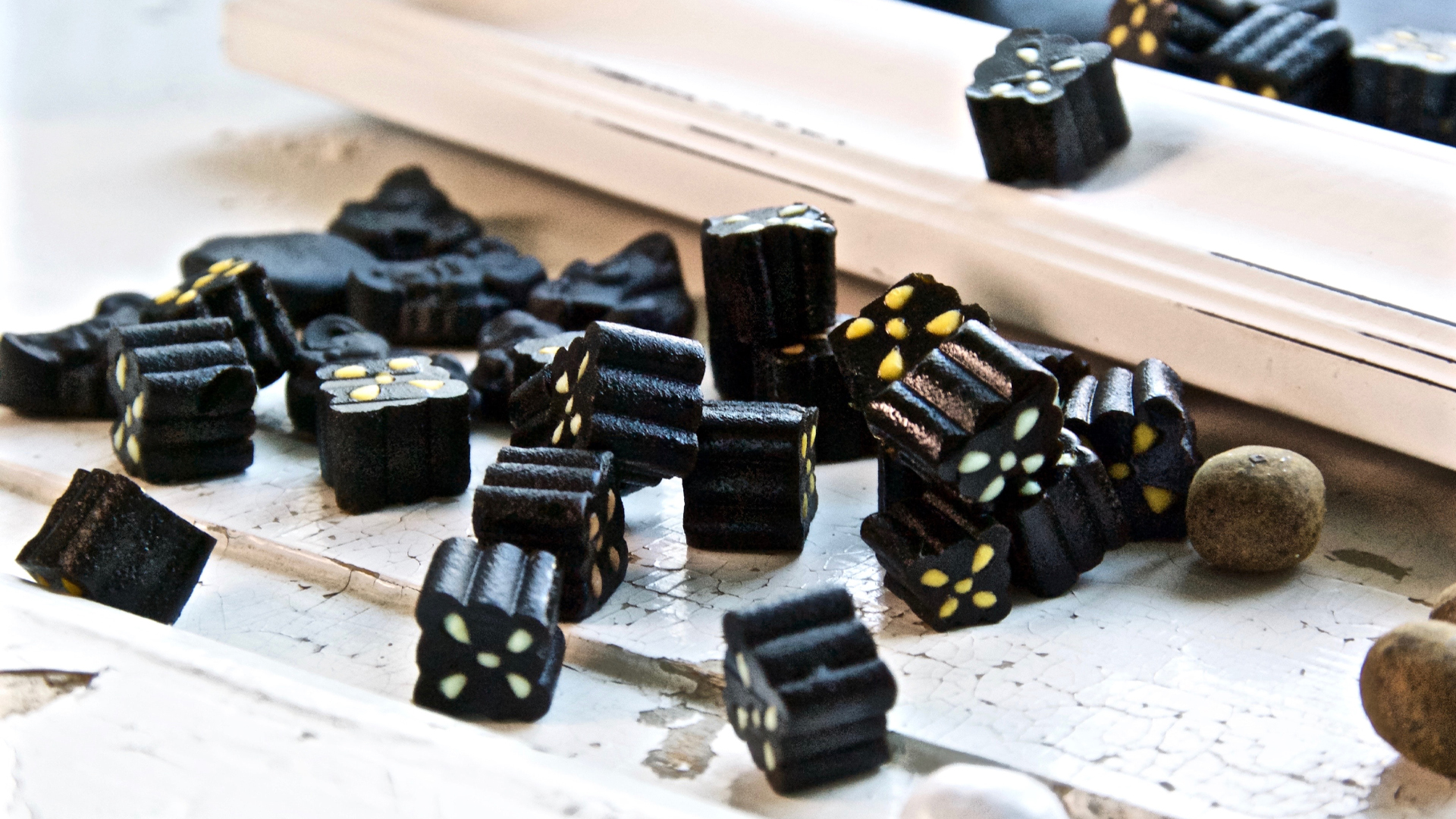 One of the first candies from Italy, Liquorice appeared around the 18th century and derived from Anise (Photo Credit: Hanna Stolt via Unsplash)

Liquorice candies first appeared in the 18th century, derived from anise, a popular aromatic. As far back as the Roman era, anise was used as a digestive aid and in liqueurs. Licorice candies were popularized by the historic Amarelli company. Founded in 1731 to produce licorice extract, the company soon after became involved in the production of candy. These early licorice candies were more medicinal than they were a treat. Over time, the candy evolved and today, the Amarelli company still produces licorice in a variety of styles and is well known for its beautiful tins.

Candy would become more widely available in the 19th century as industrialization reduced the cost of refining sugar. One candy that soon made its way to the mass market was Italian nougat, better known as torrone. Torrone, made from egg whites, sugar, and honey and filled with fruits and nuts, was likely first served at the wedding of Francesco Sforza and Bianca Maria Visconti, in 1441, but for centuries remained an expensive luxury. The term torrone derives from the word Torrazzo, the clock and bell tower that is part of the Cremona Cathedral.

Torrone started off as a regional treat around Cremona, but became the foundation for larger Italian candy companies. Enea Sperlari launched his company in 1836 manufacturing torrone and Mostarda di Frutta, a condiment popular for boiled meats in northern Italy. These "mustard of fruits" are syrups made from fresh or dried fruit with the addition of sugar. 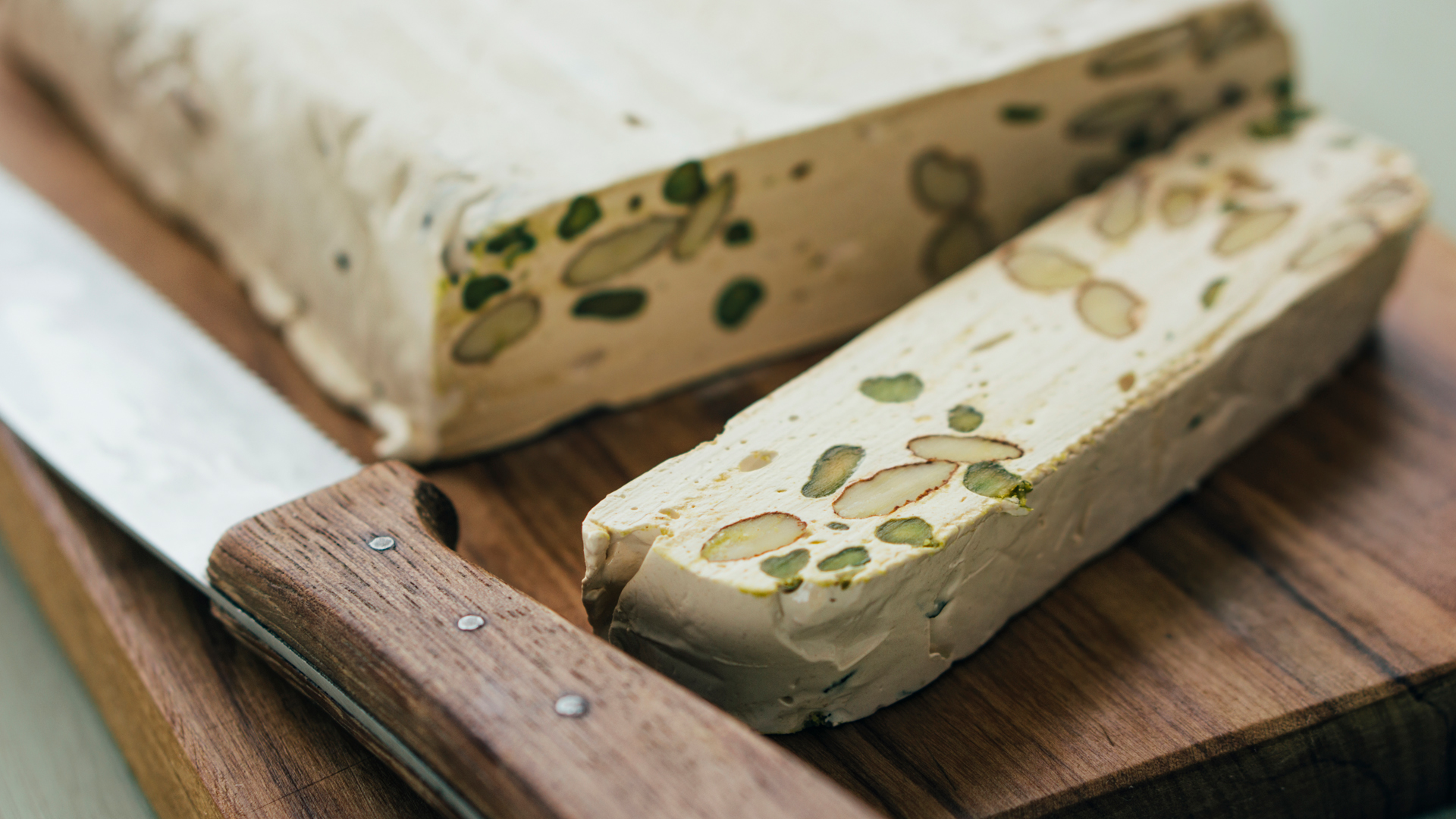 Sperlari eventually branched out, creating entirely new candies. In 1956 they launched a popular Italian candy known as Galatine Milk Candy made from semi-skimmed milk. The milk is dehydrated and combined with honey and yogurt before being formed into a tablet. The candies are also a good source of calcium.

Another candy company based in Cremona, Italy is Secondo Vergani, founded by a grocer by the same name in 1881. Vergani started off making torrone, competing with Sperlari, and by the 20th century, both companies were leaders in the torrone market.

Vergani shipped its products all over Italy and eventually internationally, expanding into chocolates and candied fruits. The candymaker should not be confused with another Vergani bakers in Milan, known for Panettone since 1944. 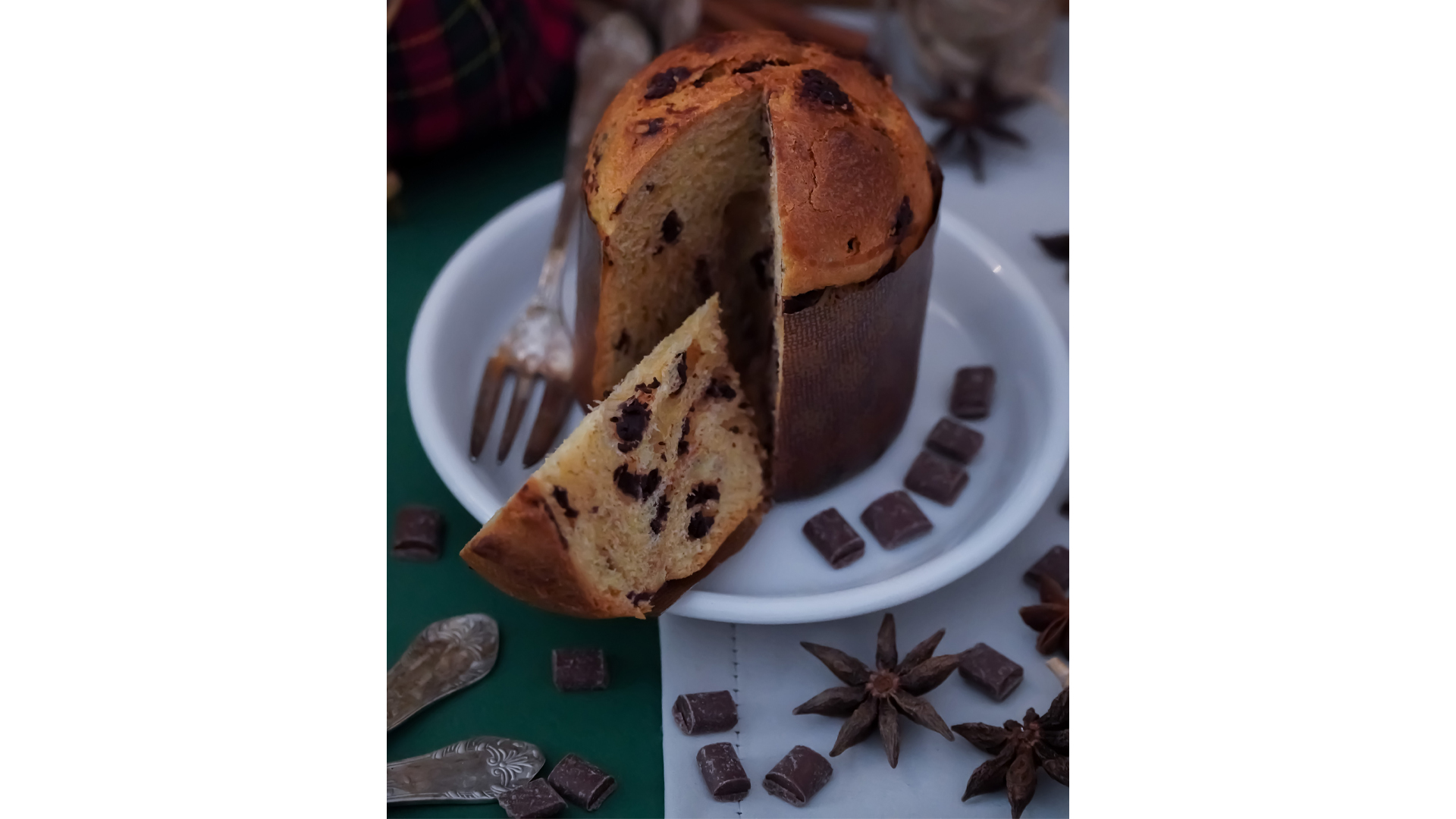 The 19th century also saw Luigi Leone launch his company, Pastiglie Leone, in 1857 in Alba in the Piedmont region of Italy. The company started off producing brightly colored, flavored pastilles. These small nuggets of sugar came in flavors like peppermint and were intended as digestives.

The pastilles proved tasty enough for the noble families to eat them simply for pleasure. Members of the House of Savoy were particularly big consumers of the violet flavor. To ensure the king and the noble families a continuous supply, Leone moved the company to Turin. Flavored with essential oils from traditional flavors like lemon, lavender, and licorice, the candy company continued to grow.

In 1934, the "lioness" Giselda Baalla Monero took over the company with her brother Celso Balla and expanded the product line. Today, there are dozens of flavors like spritz, mojito, and panettone. They are widely available in grocery store candy aisles in Italy or specialty stores in the United States. In 2018, Pastiglie Leone was sold to a secretive private company based in Piedmont.

Chocolate began to grow in popularity in the 19th century as well. At first, small producers had local shops, but chocolate remained expensive until the 20th century. Stefano Pernigotti founded his company in 1860 in Novi Ligure in Piedmont as a grocery store, but it wasn't until 1927 that the company industrialized. The process led to their famous Gianduiotto candy made by mixing chocolate mixed with hazelnut paste. The company now focuses on pastries and gelato.

Italy's perhaps best-known chocolate company was founded not to make chocolate, but to produce candied almonds. In 1907, Francesco Buitoni, Leone Ascoli, Francesco Andreani, and Annibale Spagnoli launched a new company in Perugia, Umbria. Buitoni was part of the family better known for its pasta manufacturing than candy, but nevertheless, the four founded what was known as the Società perugina per la fabbricazione dei confetti. They produced Jordan almonds, often known as confetti in Italy. The name would later be shortened to simply Perugina.

Chocolate wasn't added to Perugina's product line until after the Great War. Annibale Spagnoli invented the company's best-known candy in 1922, a chocolate with hazelnuts and a creamy filling, but it wasn't a smash hit until the candy was renamed in 1924. The Baci, meaning kiss, would sell more than 100 million chocolates in just the next five years – at least that's what a 1927 Perugina ad proclaimed. The foil-wrapped candy is synonymous with Perugina. The company also manufactures chocolate bars and other candies like the iconic chocolate banana, invented in 1925. Perugina was purchased by the multinational Neslé corporation in 1988.

Perhaps the most famous Italian candy company the world over is Ferrero, known for Nutella, a hazelnut chocolate spread – but don't confuse Ferraro with the American-based torrone manufacturer, Ferrara, founded in New York City in 1892. 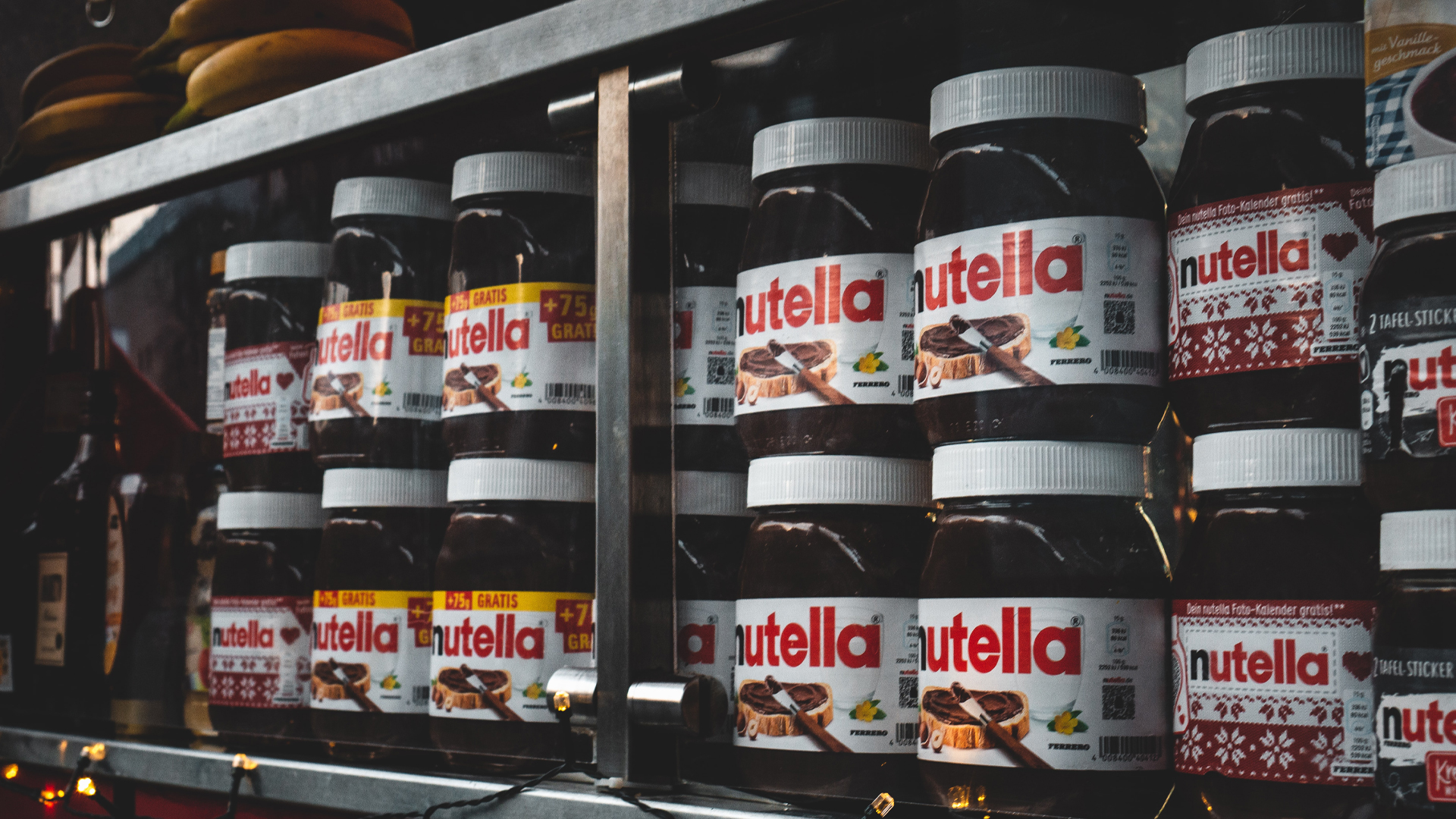 Pietro Ferrero founded the Ferrero company in 1946 in Alba where hazelnuts are grown. His first product was a form of gianduja, a paste made with hazelnuts. It was originally invented in Turin as a rich dessert used as a filling in pastries, and Ferraro produced a brand known as Pasta Gianduja sold in a loaf wrapped in foil.

Ferrero's son, Michele Ferrero, found a way to add vegetable oil to his product. The oil created a smoother paste than traditional gianduja and had the added benefit that vegetable oil costs much less than hazelnuts and cocoa. The first recipe of the product was sold under the Supercrema Gianduja label because of the creamier texture than the previous logs.

However, gianduja must contain at least 20 percent hazelnuts, and Ferraro's new product would have only 13 percent. In 1964, the company launched Nutella.

While best known for the Nutella spread, Ferrero produces a wide range of confectionery including Tic Tac breath mints, launched in 1969; the Kinder line of chocolates, many of which are filled with Nutella; and Ferrero Rocher, the luxurious ball of chocolate and hazelnut introduced in 1979. 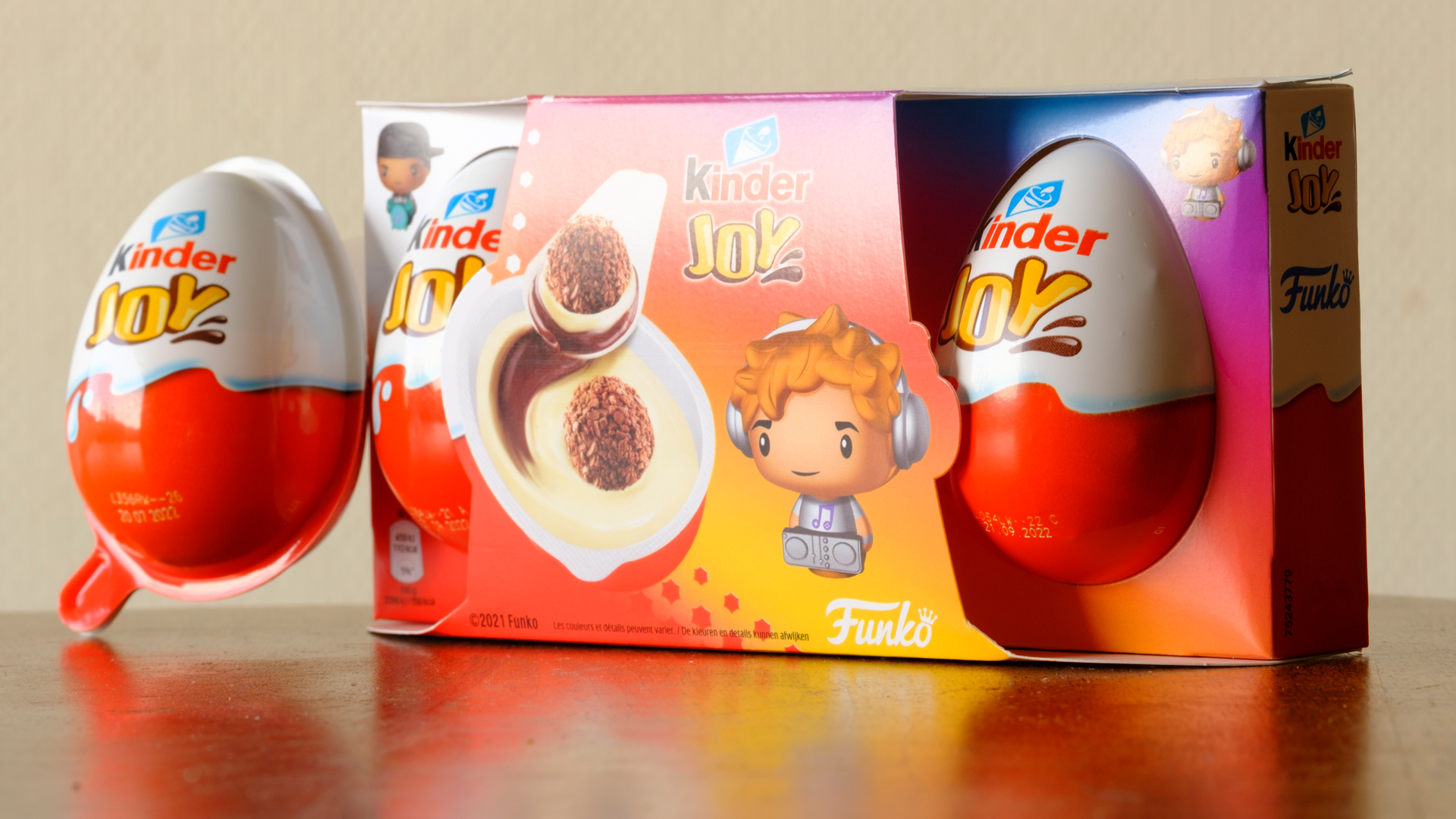 Nutella has been exported to the United States since 1983, but one Ferrero candy remains illegal. The Kinder Surprise is a chocolate egg that contains a small child's toy in a hollow shell. American regulations prohibit inedible objects in candy. Ferrero launched Kinder Joy in 2001, a similar product that separates the toy from candy.