“Longevity, Authenticity, and Quality” Continue to Make Arthur Avenue/The Belmont Section of The Bronx An Attractive Hub For Dining, Shopping, Culture, and More

The Little Italy section of the Bronx, which traces its roots to the 1700s, has changed in some ways, but it’s the foundational traits of the neighborhood that continue to draw hundreds of thousands of visitors each year. “I think what sets us apart even from other Little Italy sections around the country is our longevity, authenticity, and quality,” says Peter Madonia, longtime co-owner of Madonia Brothers Bakery and chair of the Belmont Business Improvement District. “Like any neighborhood, we’ve seen our ups and downs, but I think those are the things that have carried us through for many decades and for multiple generations. There are plenty of great new restaurants and other businesses here, but there is also a core of shops and restaurants that are owned and operated by the same families, some for more than 100 years, including mine, and some now being run by the third or fourth generation of that family. That’s something you don’t see much anymore and can’t be recreated or matched.”

Belmont’s history and name date back to 1760 when Pierre Abraham Lorillard emigrated from France and settled in what’s now known as the Bronx, an area populated by Native Americans from the Lenape tribe, close to the Bronx River. Lorillard founded a tobacco company still in existence in the area today, and its Old Snuff Mill still stands in the nearby New York Botanical Garden.

The Lorillard family built an estate, named “Belle Mont,” where the current neighborhood got its name. Eventually, the inherited mansion and the land of the estate and tobacco company along the river were divided up by the family and donated, including tracts that would become the Bronx Zoo, the Botanical Garden, the site of St. Barnabas Hospital, and other iconic institutions still in existence. Construction in the late 1890s of the zoo, the hospital, the New York Botanical Garden, the expansion of nearby Fordham University’s Rose Hill Campus, and other ongoing development in the area drew lots of Italian immigrants, particularly tradesmen and merchants, to work and live in and around Belmont.

Central to Belmont’s renown with both regulars and occasional, even first-time visitors are the restaurants. There is truly something for every taste in the eateries that line Arthur Avenue and surrounding blocks—with a variety not only in terms of the menu but also in atmosphere and “character.”

Take, for instance, Dominick’s, which is perhaps the most unique of the Italian restaurants in Bronx Little Italy, offering a no-frills setting but family-style meals that will wow anyone. There are a few things to know about Dominick’s. First, there are no printed menus. Instead, your waiter will rattle off what’s available on that day, usually broken down by appetizers, pasta dishes, and chicken or veal entrees. Second, it’s family-style seating, so you might be seated next to a stranger. Finally, it’s cash only, so no credit cards, and rather than get a printed bill, the waiter tells you how much you owe.

Another don’t-miss restaurant is Mario’s, offering Neapolitan cuisine for more than a century. Five generations of the Migliucci family have been welcoming customers to Mario’s for scrumptious southern Italian meals in a casual yet elegant dining room. 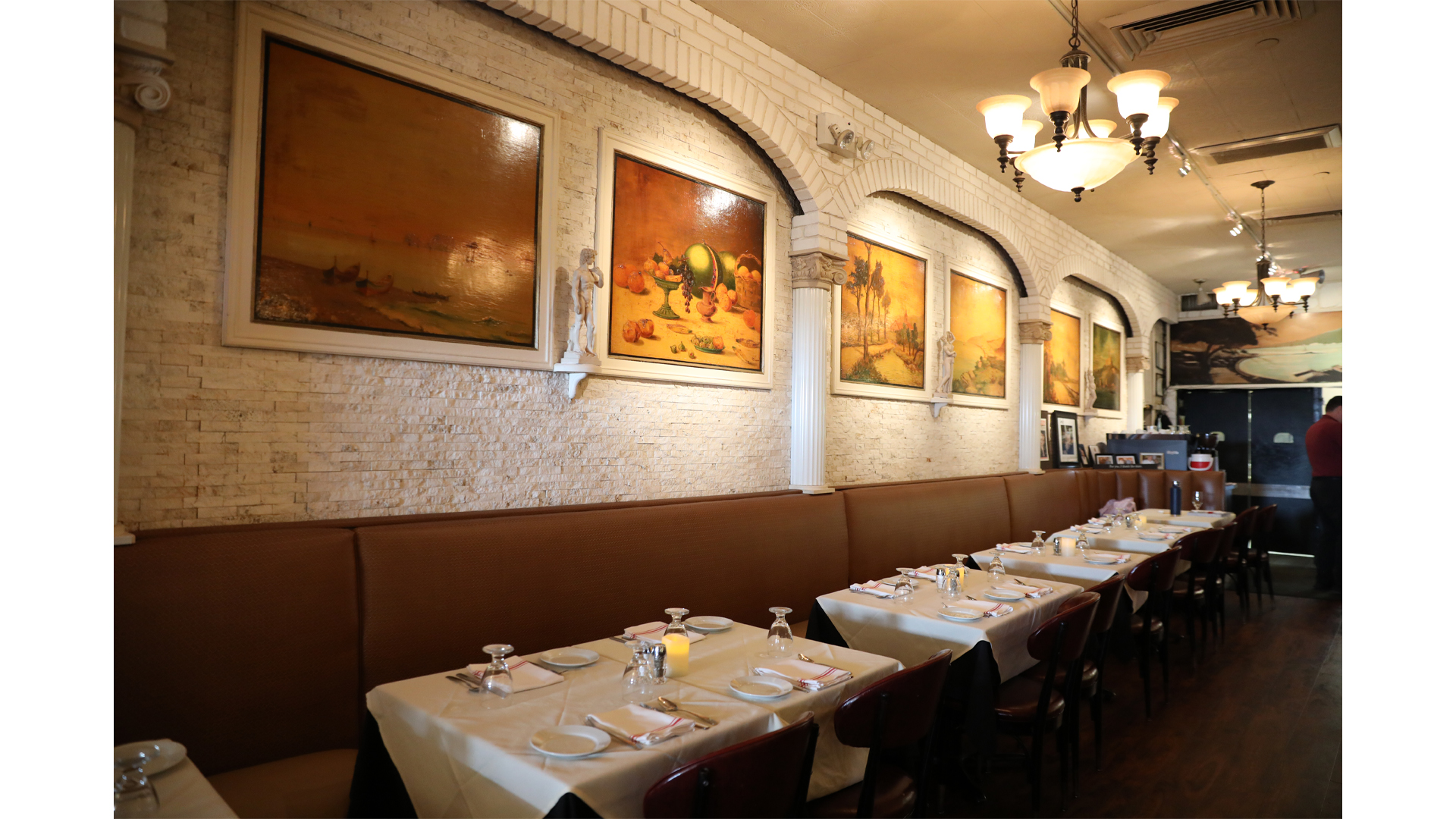 Mario's has been around for over 100 years, serving classic Italian cuisine (Photo Credit: Massimo Di Giovanna)

While standards like veal parmigiana, chicken marsala, linguine with clam sauce, or penne ala vodka are deservedly popular with first-timers as well as families who’ve been eating at Mario’s for generations, don’t be shy about trying something on Mario’s menu that’s a bit different, including authentic Neapolitan favorites like octopus salad, spiedini with anchovy sauce, or the Trippa Livornese, tripe with tomato and onions. 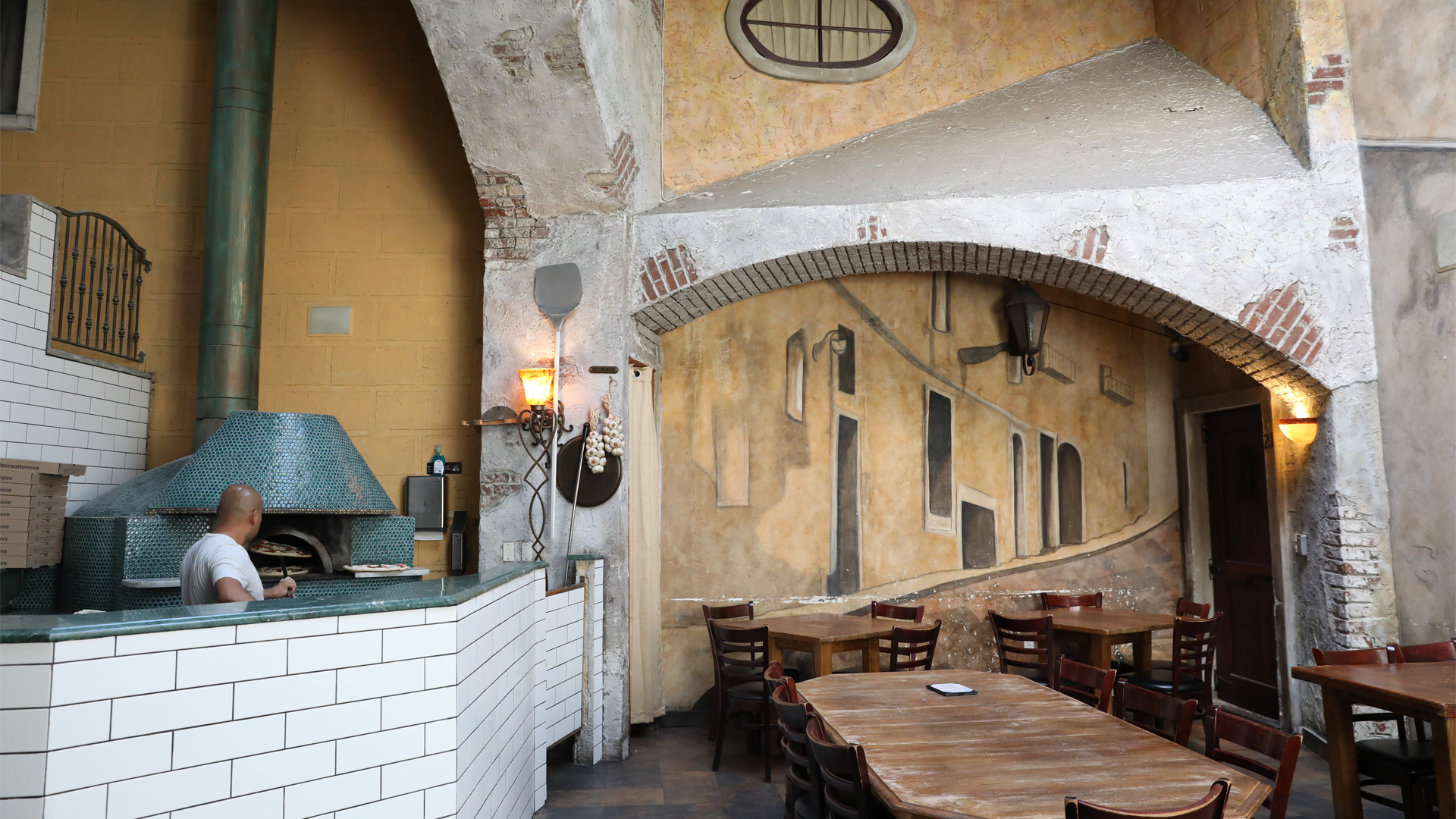 The inside of Zero Otto Nove looks like an alley straight from Italy (Photo Credit: Massimo Di Giovanna)

Roberto’s is best known (and loved!) for its unparalleled homemade pasta, an extensive, award-winning wine list, and the culinary talents of its namesake, chef and owner Roberto Paciullo. Dive into hearty-sized meals such as orecchiette con polipo e fave (little ear-shaped pasta with grilled octopus, clams, and fava beans), the veal chop parmigiana, or the rigatoni con broccoli rapa and you’ll appreciate why Roberto’s has solidified its spot among the favorite eateries in Belmont. Paciullo’s other restaurant, Zero Otto Nove on Arthur Avenue, is also a treat.

Looking for a quick and casual meal? Grab a slice or two at Full Moon or the other handful of pizzerias in the neighborhood. 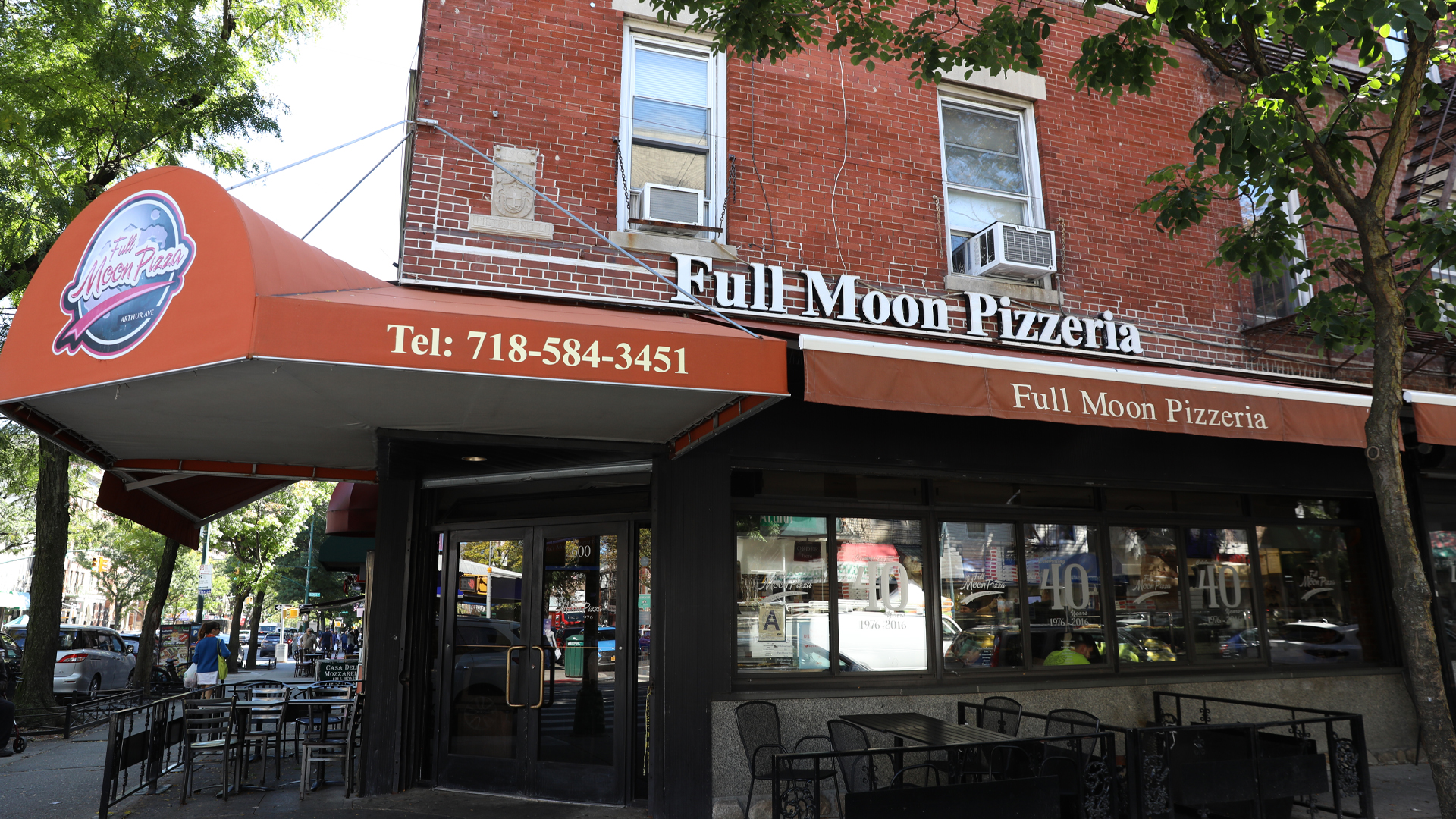 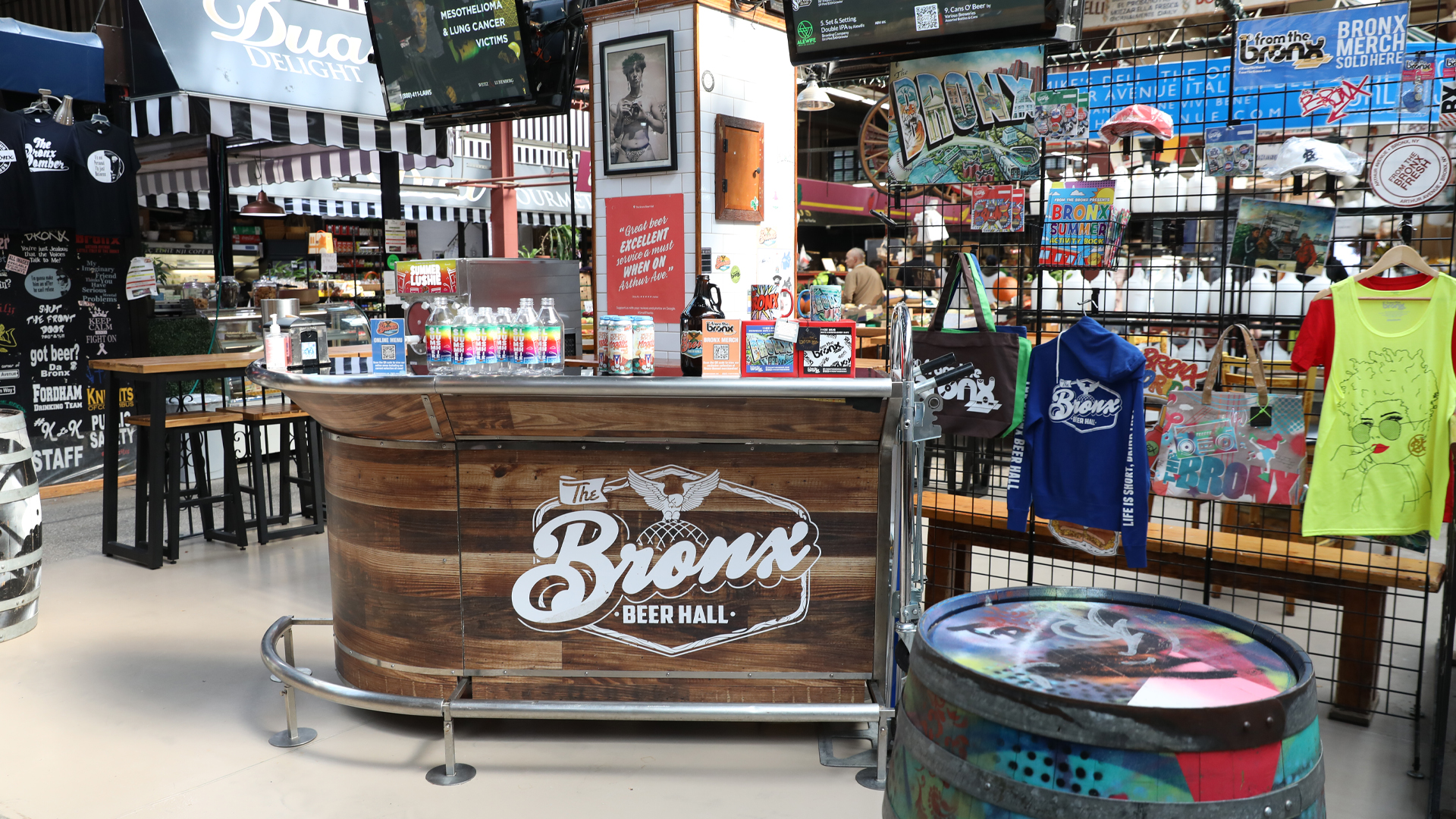 The Bronx Beer Hall offers many Bronx-themed items as well as an extensive bar filled with a variety of beers (Photo Credit: Massimo Di Giovanna)

“We still have three butcher shops, two fish stores, three or four bakeries, five or six pastry shops, a few salumerias and delis, gift shops, cafés, a wine and liquor store, cheese shops—even a store that only sells pork products,” Madonia explains. “You put all those together, and I think it makes us pretty special, pretty unique.” 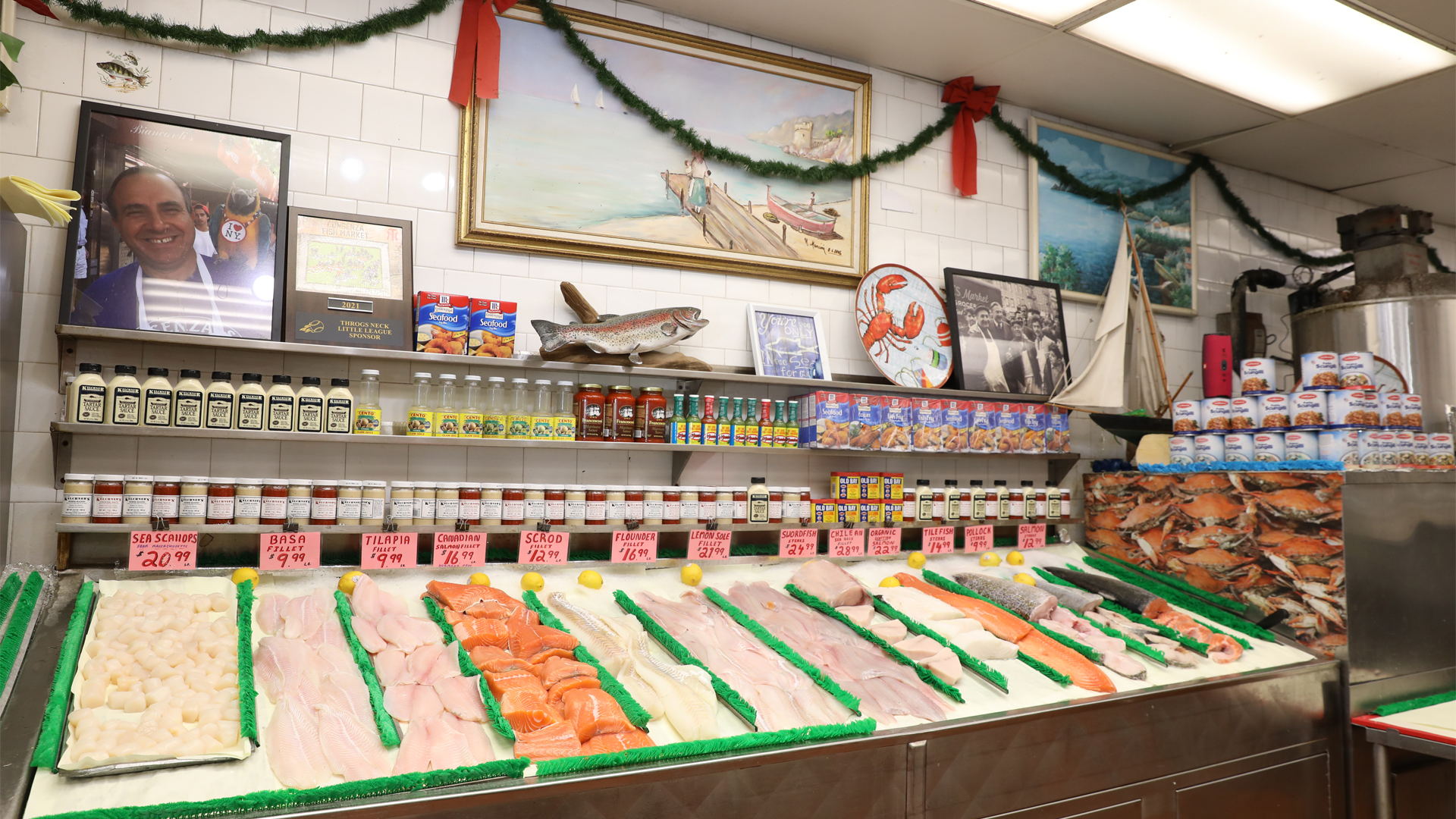 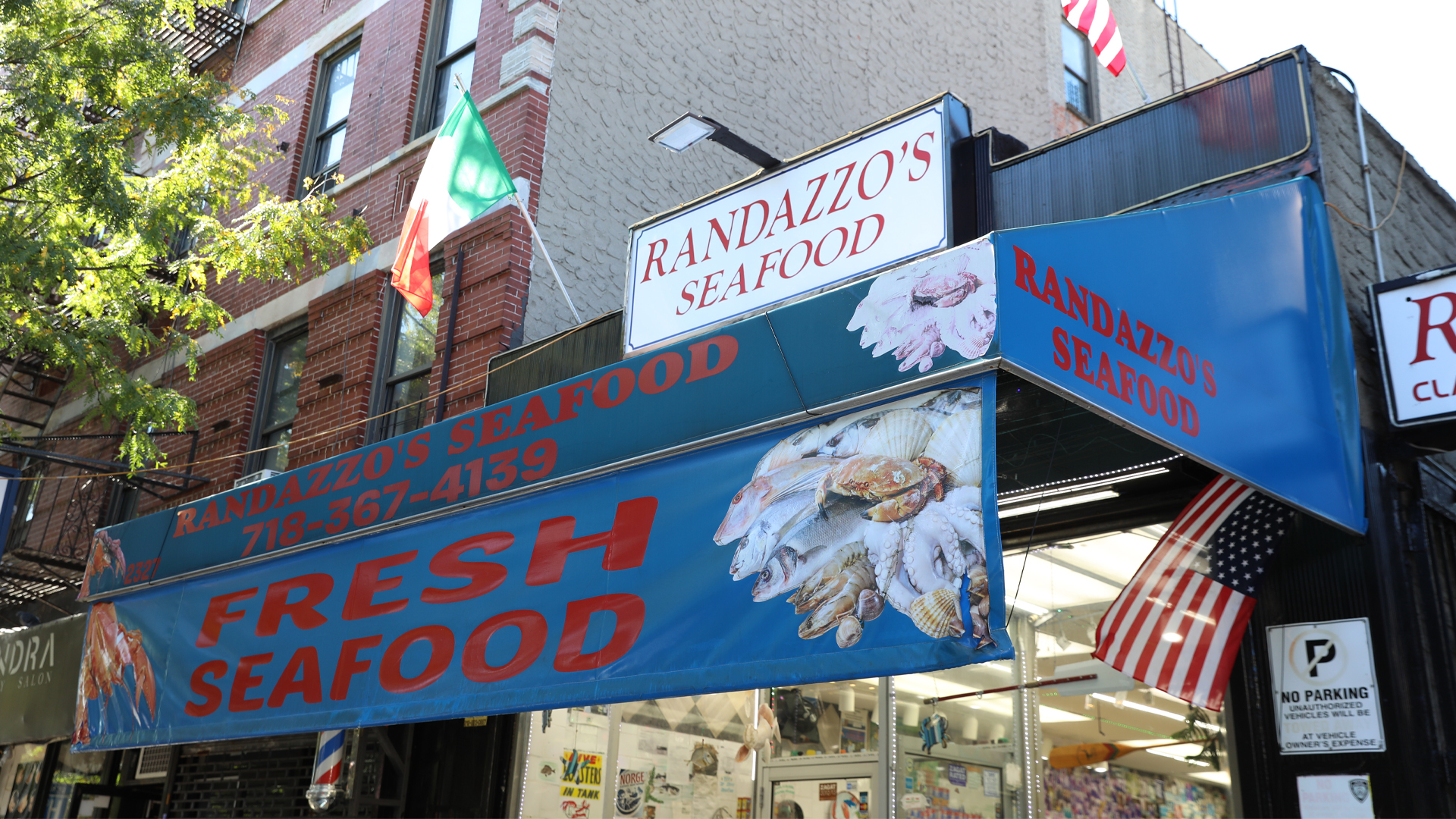 Walking through the neighborhood, enjoy some freshly shucked clams or oysters right on the sidewalk outside Cosenza’s Fish Market or Randazzo’s Seafood. Pop into Calabria Pork Store to shop or just to see the sausage dangling from the ceiling, what some refer to as a “sausage chandelier.” 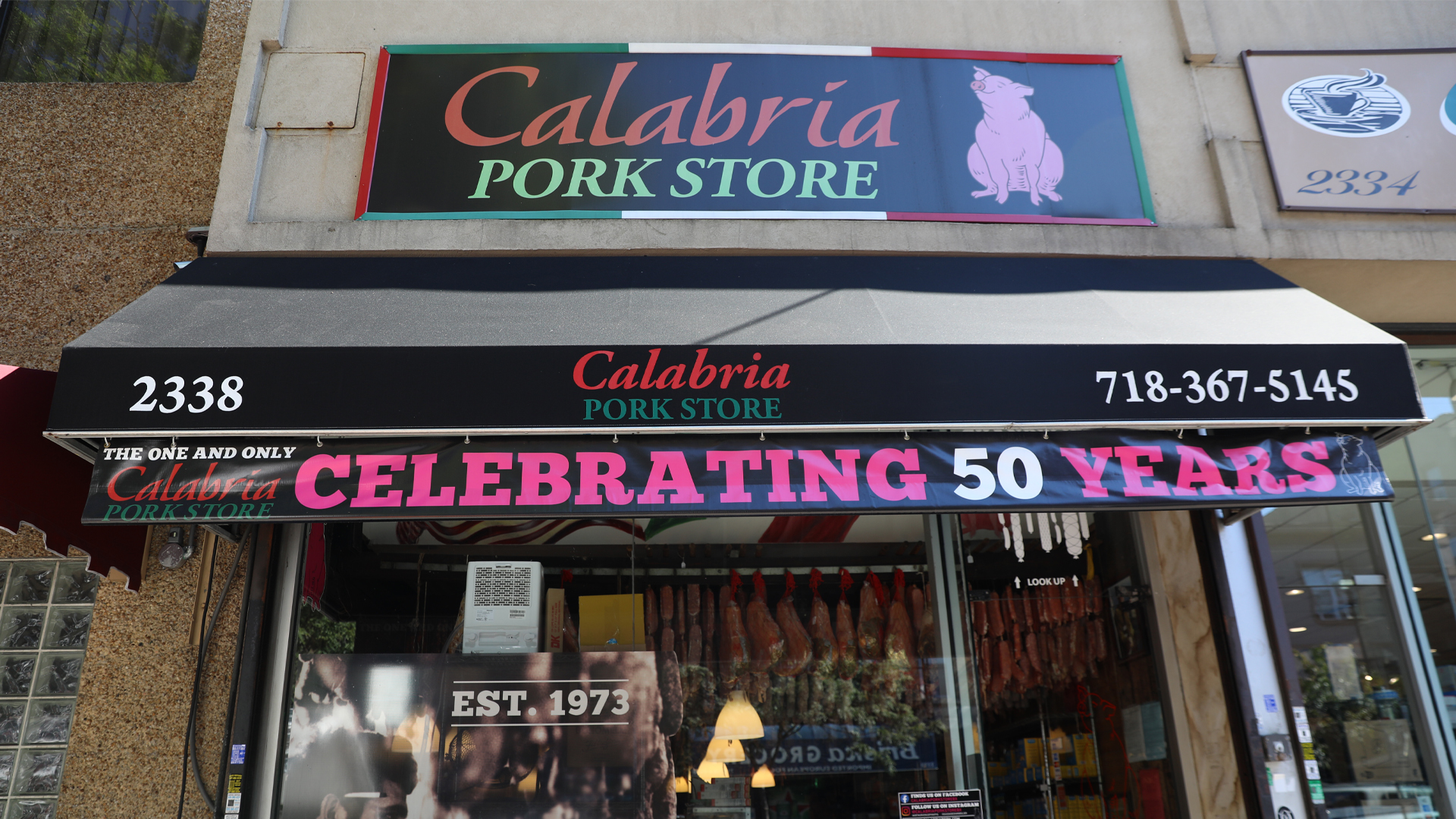 Stroll through the indoor Arthur Avenue Retail Market, taking in the sights, smells, and tastes from food vendors of all kinds, as well as the iconic Mike’s Deli and more. Buy cigars from Casa Grande Cigars, or simply watch them being hand-rolled by craftsmen. Grab a drink at the Bronx Beer Hall. 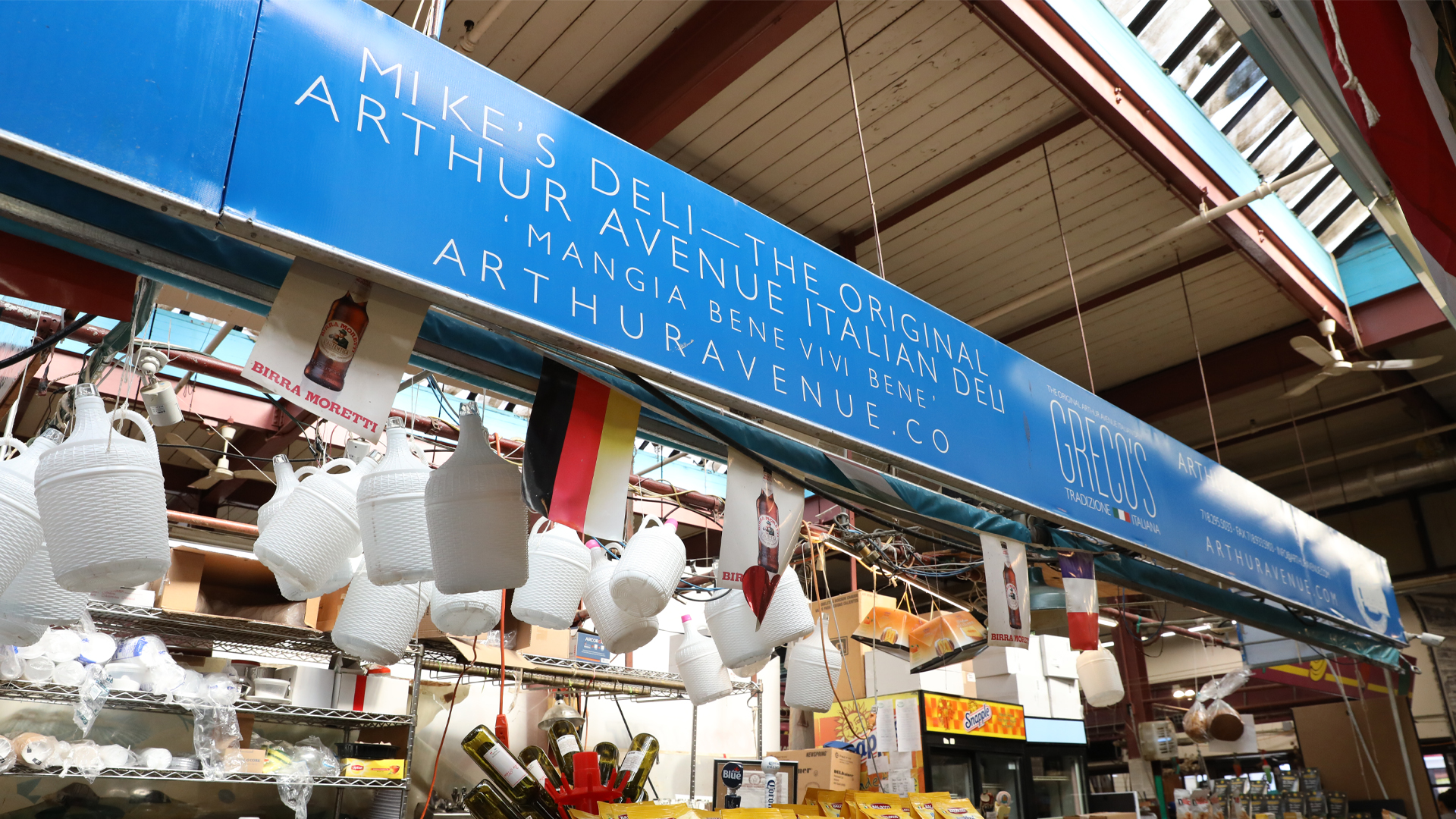 Afterward, have an espresso, cappuccino, and some cannoli, cookies, Italian ice, gelato, or other sweet treats at one or more of the cafés and pastry shops. 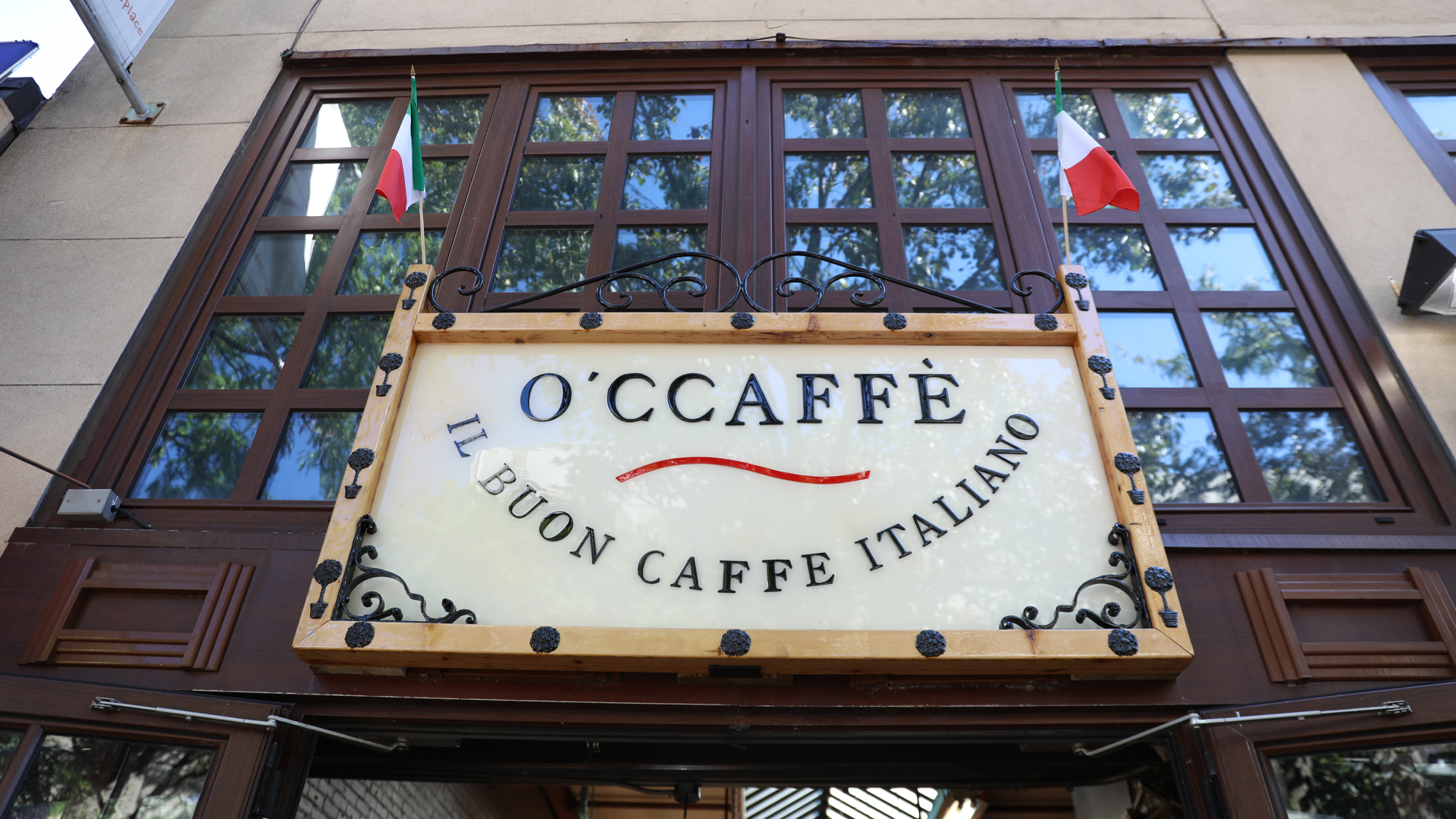 The O'Ccaffe is the perfect place to end the dday with a cup of cappucino (Photo Credit: Massimo Di Giovanna)

One way to experience all that Bronx Little Italy has to offer is Ferragosto, a street festival held each September.

The Belmont Business Improvement District continues to promote and expand the economic well-being of the business community and the community at large through various initiatives, programs, and resources.

John Roche is an award-winning journalist, author, and faculty member in the Department of Writing and Literature at Western Connecticut State University, where he earned his M.F.A. His crime novel, BRONX BOUND, was published in 2015. After working full-time as a newspaper journalist for 25 years, Roche switched to teaching journalism and other writing full-time at the undergraduate and graduate levels. He continues to regularly freelance for regional and national publications.